According to the latest Savills report, the volume of investments in commercial real estate in the Czech Republic in the second half of 2020 amounted to 797 million euros, with 60% (ie 478 million euros) of these investments related to Prague real estate.

Despite the impact of the covid-19 pandemic on investment activity, commercial real estate in the Czech Republic attracted € 2.7 billion in capital throughout 2020, which is 11% less than in 2019 and 13% below the annual average for the last 5 years.

Despite the absence of investors from South Korea and the USA, who were very active in the Czech market in 2019, the volume of cross-border investments increased slightly in 2020 and reached € 2.02 billion (a year-on-year increase of 4%). In 2020, the share of foreign investors in the total amount of investments in the Czech Republic was 75%, while in 2019 it was 64% and 41% in 2018.

Without the acquisition of the Residomo portfolio by the Heimstaden Group, the share of domestic transactions would increase to 49%. The highest number of transactions took place in the office segment (15), followed by retail properties (14). Domestic investors were behind 26 transactions out of a total of 46, and more than half of these cases concerned properties outside Prague.

Even in 2020, yield rates for “core” real estate properties in premium locations proved their resilience. After a slight increase in the first half of the year, revenues for the best office buildings stabilized at 4.10% in the second half of the year. The estimated rate of return on premium shopping centers remained at 5.75% (75 bps higher than at the beginning of 2020), however Savills recommends that some caution be maintained when estimating yields on premium shopping centers, as it is one of the real estate sectors, which have been most affected by the pandemic and the differences in yield rates may be partly related to the amount of rent, which is perceived as disproportionate given the pandemic situation.

For first-class industrial real estate located in premium locations, which are in short supply on the Czech market, the yields are estimated at 4.25%, which is 25 bps lower than in the middle of the year, when they reached 4.50%. 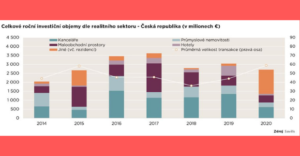 Investors' appetite and the availability of capital for acquisitions are high. More expensive financing may be an obstacle to a higher number of transactions, especially in the "non-core" real estate category. Nevertheless, the cost of funding remains acceptable compared to higher levels.

Investor activity was subdued in 2020

Vojtech Wolf, investment analyst at Savills CR and SR, comments: “Investor activity was subdued in 2020, but a significant amount of capital prepared for real estate transactions remains available. We, therefore, expect that the first half of 2021 will be active in terms of investment, which will be supported by the continuing interest of investors. In addition, the seller will encourage relatively high prices of completed transactions, despite the ongoing pandemic situation. "

He added that when setting prices, greater emphasis will also be placed on the quality of tenants, their financial condition and factors influencing the demand for premises. Prices will be judged on the total value of capital, not necessarily solely based on yield.